May 15, 2018
I was actually watching a youtube video based on an old-school scary movie and realized that my kids are now old enough to watch the scary movies that I grew up on!

Beware there will be affiliate links so you can see which movies or their book I am talking about!

I was so happy because it takes a lot to scare my kids but also it is a coming of age thing for them as well!
So whats your favorite scary movie? Do you have that one movie you have to wrap yourself in a blanket to watch? My favorite scary movie by far has been and always will be THE SHINING! Seriously Jack Nicholson coming through the door with the ax saying "Heres Johnny", Is my favorite horror scene of all time.
My first horror book was The Shining and I later picked up the sequel to it Dr. Sleep! (BTW if you have a teen or preteen who likes to read Dr. Sleep is on my no read list as it's not for the preteen crowd.)  Movies based on Steven King's books basically head up my list of scary movies!
IT, Needful Things, Pet Semetary, The Tommyknockers,
FireStarter, Christine, and Carrie!

The next scary movie series I love is the
NIGHTMARE ON ELM STREET!
Who cannot forget hearing the ominous song start ... "One Two Freddy's coming for you!"
I mean these movies are such a hit they brought Freddy back in a new movie in 2010!

Then you all have our Friday The 13th, Jason Movies!
Seriously Jason can't be killed they even rebooted the series in 2009! Camp Crystal Lake we thank you for bringing us Jason and come on everyone Jamie Lee Curtis as Jason's sister in the later movies!

Heck Even Freddy and Jason fight in out the movie
FreddyVsJason

Then lets not forget these awesome solo movies,
Or these scary franchises that started up since the big boys up there took the screen:

So do you like any of these movies? Which movies scare you? Let me know in the comments below! 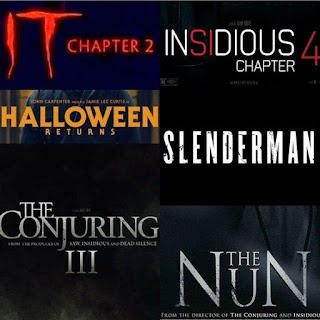 January 12, 2023
Well, all its been a long while since I have posted. I can make excuses, but seriously, what would be the point. As most know I try to be 100% transparent and honest in my posts. I have been struggling... A LOT. I suffer from anxiety and depression. I have been hiding away from the world basically crocheting and working. I have missed my blog and have just started the great revamp. My life has changed so much in the last three years. I decided that I am coming back on my terms to start posting like I want to instead of a need to fill the blog. As my life has changed so much I will be deleting and removing a lot of the old posts that I feel were filler and starting fresh. I will still be sharing my writing and my very rough versions of the books and stories I am working on as well as adding a new section of my paranormal adventures.  So I guess the biggest thing I can say is please excuse the dust as we are remodeling. Much love and blessings, Angie
Post a Comment
Read more

The Toast To The Exhausted Mom At The Holidays

November 18, 2018
I think  I  have cracked a few yawns just bringing up the blog page to write this. But seriously while Santa is hoarding all the Christmas Elves at the north pole we the regular run of the mill mom's are in a holiday rush.  I will admit things are a bit less crazy for me this year as I am not doing the retail store thing.  If you're a Mama who is working at a retail store I salute you and for whoever wants to be mean to that Mama who has her soul ensnared by the life sucking demon of the retail work I have one thing to say to you! "May you walk down a hall of Lego's with bare feet in the dark!" That's right, I said it! I did eleven years in a retail environment and before that I did food service with both restaurants and stores for another eight. I will never wish those jobs on anyone because people during the holiday season can be downright evil!  I am thankful, although I do Customer Service from home now I at least don't have to worry about h
Post a Comment
Read more

Losing a Loved One!

July 10, 2019
So I debated on writing this for a while, but I think there has to be something for grief. Our grief shows us that we are still alive.  However, one thing that we are never told is grief no longer how long the person we lost is gone, does not fade away. I wish people would be honest and just admit that losing someone you love and care about is hard. It's a gut wrenching feeling that hurts you both emotionally, physically and spiritually for a long time. I mention this because eight years ago today I lost my Grams.  This woman kept me safe from the monster of the world. She was not afraid to tell me that there are secrets in my family and that I do matter.  She taught me more about life than anyone else and the pain I feel is a harsh reminder that I will never see her again.  I finally had to remove her contact from my phone because I would try calling her up till a few months ago. Through the pain and grief you do eventually wake to a new type of life. I have learned t
Post a Comment
Read more